The Abu Dhabi Human Resources Authority and the Emirate's Retirement Pensions and Benefits Fund said that the payment of benefits in accordance with the provisions of the resolution of the scale of grades, salaries, allowances and bonus for new employees of the Abu Dhabi Government will start after the issuance of the Executive Committee's resolution to transfer all employees of government agencies to it. 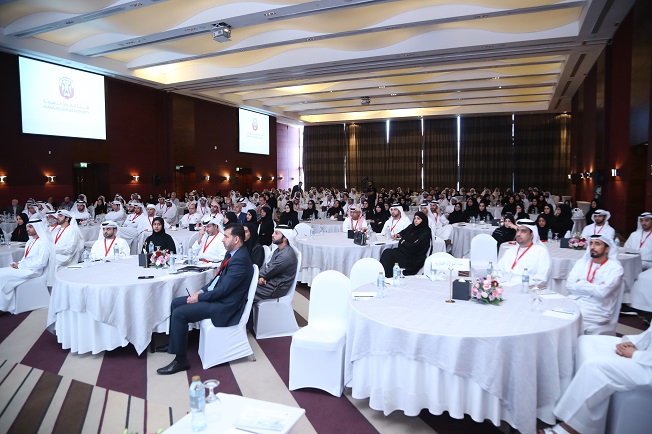 The Abu Dhabi Human Resources Authority and the Emirate's Retirement Pensions and Benefits Fund said that the payment of benefits in accordance with the provisions of the resolution of the scale of grades, salaries, allowances and bonus for new employees of the Abu Dhabi Government will start after the issuance of the Executive Committee's resolution to transfer all employees of government agencies to it.

They stressed that the government agencies will continue to work with the approved schedule of grades, salaries, allowances and bonuses until the issuance of the new schedule, and then the completion of the transfer process to the new salary schedule.

This was held during an introductory workshop for specialists in government agencies, organized by these two sides in the context of following up and facilitating the implementation of the provisions of the resolution on the scale of grades, salaries, allowances and bonuses for Abu Dhabi Government’s employees, and its implementation plan, and the sequence and smoothness of its procedures, in addition to providing a guide to government agencies, and training specialists on how to use the electronic system to transfer employees on the payroll, and implement the practical application in this regard, and respond to any inquiries in order to enable these bodies to implement the provisions of the resolution easily, and to educate the employees of their bodies and respond to all their inquiries.

Increase of pension upon retirement

In relation to the percentage of the expected increase in the retirement pension, there is no unified percentage to increase the pension for the employees covered by the resolution. Where the value of the salary subject to the new deduction will be determined for the current employees after making transfers to the new salary scale, on the basis of which the expected pension shall be calculated, and knowing the percentage of the increase that occurred after the resolution.

The new schedule has enhanced the career progression opportunities for current employees. Where the main degrees in the schedule included three sub-degrees, which provided the opportunity for government agencies to reward and maintain distinguished employees through a smooth transition in the same degree in addition, to the possibility of developing career development plans, and enhancing the positive spirit in government agencies.

As for the civil retiree from the local authorities, he shall be subject to the provisions of Article (42) of Law No. 2 of 2000 regarding civil retirement pensions and benefits for the Emirate of Abu Dhabi and its amendments, and he shall be returned to service and be entitled to the total salary and financial allowances for the degree of the job he is appointed for, and his retirement pension shall be suspended.

The employee shall in accordance with the schedule be entitled to the rental advance, while the non-national employee appointed after the issuance of the resolution shall be granted the annual rental housing allowance according to the job grade for which he is appointed, and the specified housing allowance for each grade.

Continuation of the current schedule

The government agencies continue to work with the approved schedule of grades, salaries, allowances and bonuses before the issuance of the new schedule until the completion of the process of transferring their employees to the new salary schedule in accordance with the period specified in the special circular regarding the transfer of government agencies employees to the schedule of grades, salaries, allowances and bonuses. In addition, the government agencies must also amend the applicable human resources policies, procedures and systems, as well as employment contracts, and be signed by employees in accordance with the provisions of the resolution.

For current national employees working in government agencies, the basic and total salary that the employee receives before the transfer process will not be affected, and all items of the total salary and other benefits that the employee receives on a regular basis will be included in the total salary before issuing the resolution, except for the education allowance/ benefit, airfare allowance and any other allowances determined by the Authority. The new appointments will certainly be subject to the new schedule.

As for the current non-national employees, they will keep the same financial allocations granted to them before the issuance of the salary schedule referred to.

The new schedule is a new salary system for grades, salaries, allowances and bonuses in the Emirate of Abu Dhabi and is not a reform a pension system, as all matters related to pensions and the mechanism of their calculation or the values subject to deduction are stated in Law No. (2) of 2000 regarding civil retirement pensions and benefits in the Emirate of Abu Dhabi.

The Emirate's public treasury shall pay the financial cost resulting from the application of the provisions of the resolution including the pension obligations incurred towards the Abu Dhabi Retirement Pensions and Benefits Fund.

The new schedule grants the chairmen of government agencies the authority to reward employees who provide outstanding work by determining the percentage of the excellence allowance for them which shall be paid on a monthly basis in accordance with the controls specified in the guide issued by the Human Resources Authority in the Emirate of Abu Dhabi. And also among the allowances that have been created in the new schedule is a recruitment allowance, which enables government agencies to attract distinguished talents to fill jobs in all government agencies, in addition to continuing to pay the social allowance to children at the rate of 600 dirhams for each son.

The values and controls of the overtime allowance and delegation allowance for official or training missions inside or outside of the country have been reviewed with the aim of motivating employees in government agencies and enabling them to perform their tasks in order to achieve the objectives of the government to enhancing leadership in the work environment and increasing the efficiency of government agencies’ performance. Consequently, the employee who receives what he is financially entitled to, is expected to perform his work efficiently and productively, which will benefit the performance of government agencies in general, and the government agencies must include the necessary credits to grant the allowances referred to above within their budget project, and not disbursing any allowances only after verifying that its value is available within its approved annual budget, allowances and bonuses.